As a newer customer (somewhere over 4 years), I would like some help in this particular matter. I am a HUGE fan of your company since the entrance of your current CEO John Legere. I am writing on the basis of a small complaint and a request, as a well as a hope for the near future merger (if approved, more on that in a minute) of Sprint and T-Mobile. I am writing on the growth pains that T-Mobile is experiencing and it is painful for those of us outside of major metropolitan cities. I currently live in Cleveland, TN and I am having an issue with your coverage and it’s current solution that you provide, among many for those of us in this predicament and I appreciate it, but it needs some re-thinking in my opinion.

I want to share that as I stated above, I am a HUGE fan (and promoter) of T-Mobile and for the first time since I left my mother’s plan, after being with At&t from the age of 18 through my early 30’s, you all provided me my first stand alone cell phone service, so I appreciate that! You can see just a few of tweets from years past here:

I have to say @TMobile @TMobileHelp @JohnLegere You guys fixed my NO LTE issue between Nashville & Chattanooga! pic.twitter.com/e4R0EshCRU

it looks like @tmobile is #killingit down in Pensacola, FL! Check out this speed test!!… https://t.co/9rOGe4X1T4 pic.twitter.com/3aytGYJBca

I have to say… Thanks @TMobile my Tuesdays just got better! #TMobileTuesdays $0.10 off at shell for March!! pic.twitter.com/o4EPAKXdBJ

This is not to say, that I have not also had my complaints, as no company is perfect and we all know that. It’s part of competition and what makes the market grow and learn. Even though you charged me $150 more that At&t (and even $50 more than Samsung) was for the Galaxy Gear S3 Frontier (see tweet below)! I gladly accepted it and purchased it anyway and still wear my Gear S3 to this day.

this ISN’T really Savings @TMobile @JohnLegere it’s a thinly vailed LIE.. you aren’t saving me money when @ATT has it for $249 or $349 pic.twitter.com/LdOGXQY2Zb

I am coming to you now with an issue I have with the coverage in my area and the current solutions you have and the specific one that I chose. I have to point out first that I recently moved back to Cleveland, TN back in the summer of 2018 and have only been here for approximately 1 year and I am struggling to keep service here in my area of travel outside of my home. The area of Cleveland on the North side, doesn’t really have an issue, but the South side does and I hope that you can help!

I recently tweeted about this issue back in September of 2018 and ended up ordering the T-Mobile 4G LTE Personal Cell Spot that uses a small Nokia Femtocell micro tower in my house. The second version of this is what I received, since this was announced in November of 2017 and I did not set this device up until recently.

I love @TMobile but I want better coverage in Cleveland TN. @JohnLegere please look into this area! #WeWontStop You can see my route yesterday, but I have driven down to Dalton through the 2nd route as well. This area has no connection. pic.twitter.com/XYfytKd0h5

I want to explain my frustration in two areas, both your coverage vs actual coverage and the aspect of payment for this solution that you are providing for “cheap” or free in certain situations.

Your website is very misleading on the map’s coverage colors and how they blanket areas. I actually had sold a friend on T-Mobile and had him swap his entire business, some 13 lines over from Verizon a few years back. Unfortunately, due to your misleading maps, he got mad with me and swapped back and I believe ended up having to fight with a regional manager on getting all of it fixed.

So let’s start with my area of living in Cleveland, TN. I will show you the map that you guys provide to the public for my area: 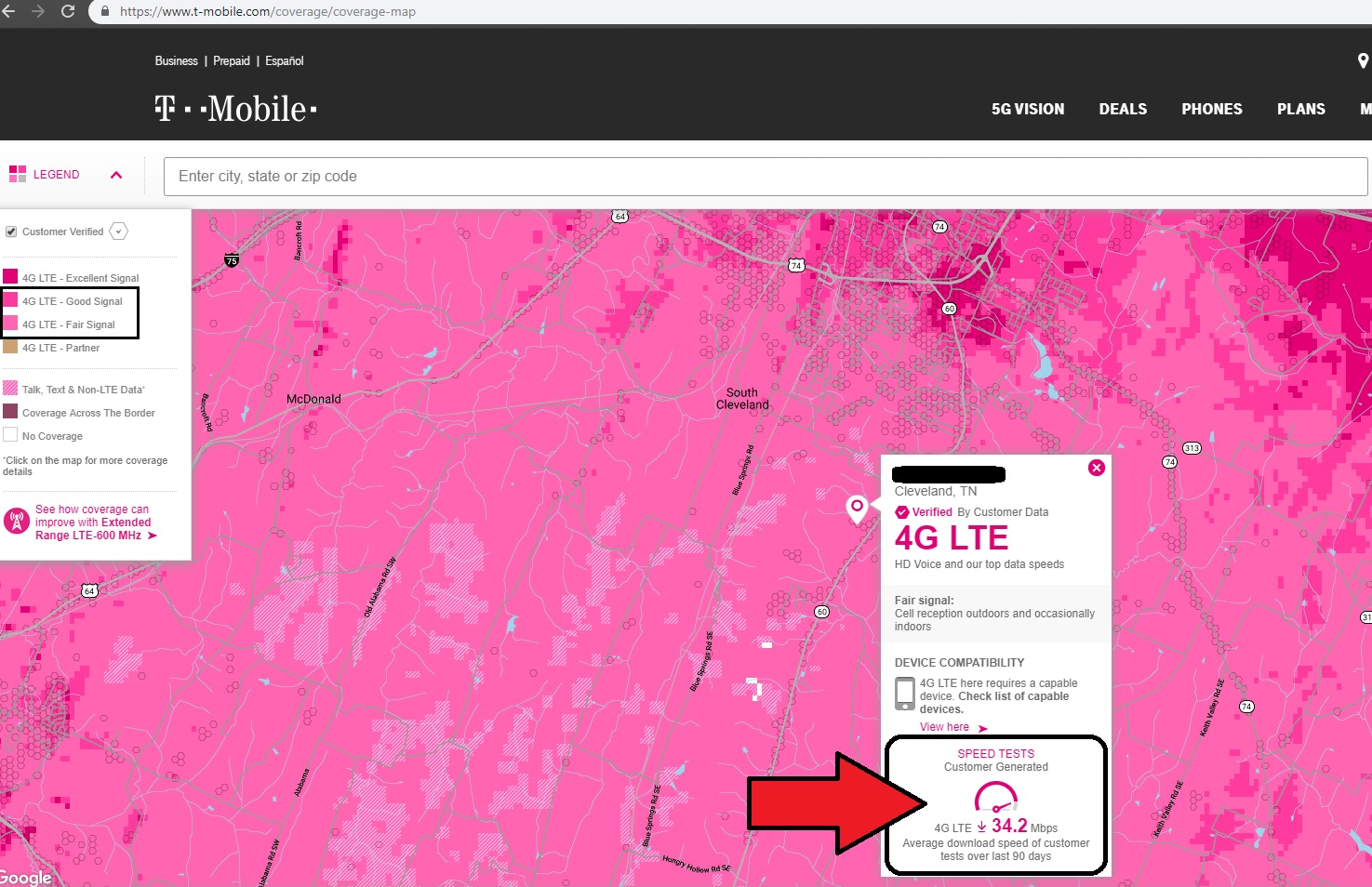 The map shows my address and even shows my verified tests that I have done. This is an average, due to the fact that I live at the top of the hill and can see for quite a few miles in most directions from our house, so this can be attributed to sea level of my house. The issue runs into the fact that when you get to the bottom of our hill, we lose signal almost immediately and I have to either travel North for a few miles before I start getting a signal and then I can start my Pandora stream (thanks for the 1 year of Premium, BTW!). You can even see in my tweet that I mentioned above, that if I travel Southward, that I lose signal for quite a few miles until I get into the Georgia area, after I cross the state line. This map makes it look like I should have Good to Fair coverage in my ENTIRE area, but this is very false.

I do understand that it takes time to grow a network, in purchasing, licensing and leasing fees to put your equipment on pre-owned towers that other companies have already put up. I even began to look deeper into the issue and see that you guys are most likely paying a leasing fee to Tillman Infrastructure for the nearest tower to me. So I wanted to look a little deeper into this and it looks like there are several customer facing websites that I can search for better understanding of the coverage issue. One of the first ones is CellMapper.net: 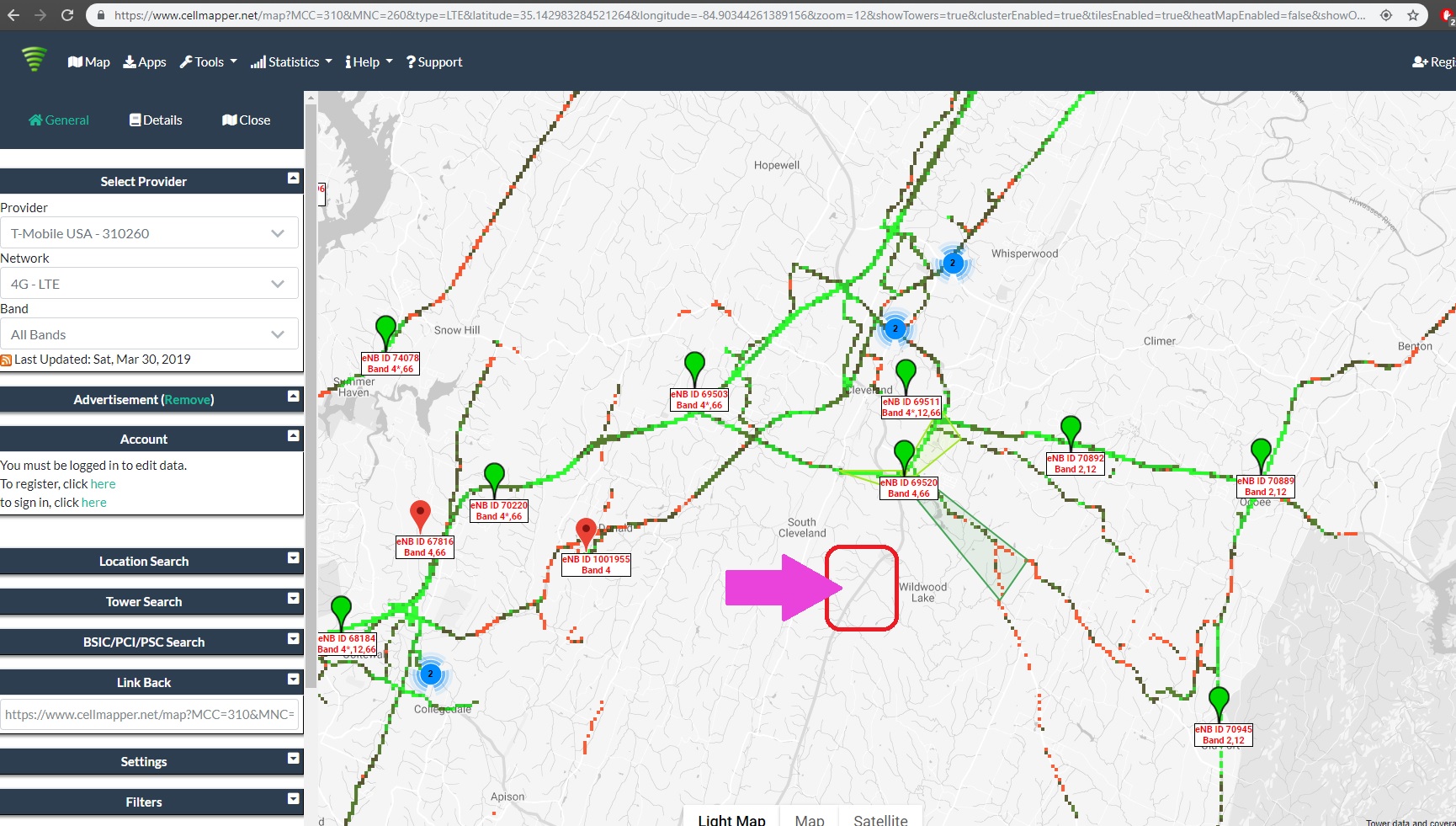 So I see that there are towers North of me, but it looks like my area is just this weird area that T-Mobile does not cover for some reason. So I wanted to search other sites for more details and maybe confirmations. So I then looked into AntennaSearch.com, which is how I found out who built or owns the tower now, where you have the nearest tower to me: 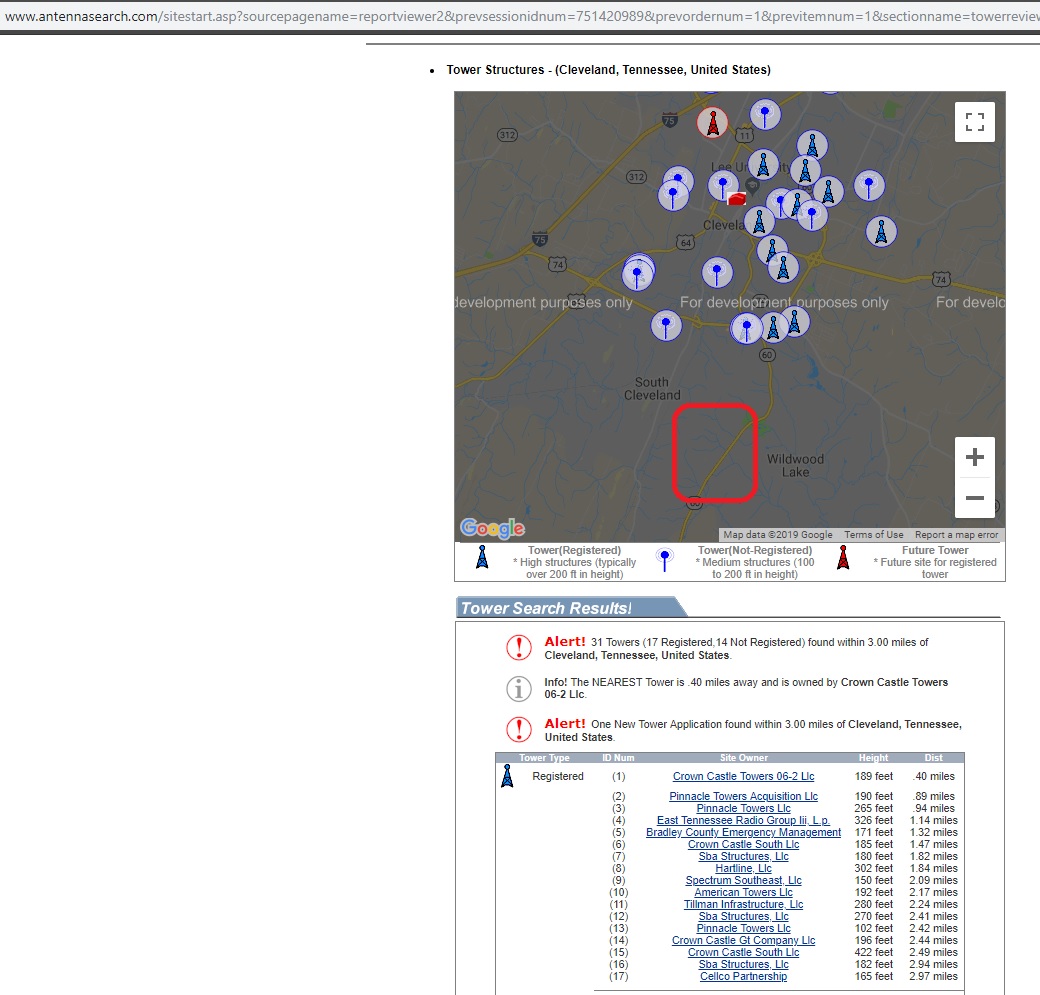 You can see a confirmation that the towers available in my area are limited to the North side of town and for some reason, our little sliver is neglected by T-Mobile for some reason. Until, I got to my third site, CellReception.com and was able to understand why. Maybe, T-Mobile isn’t ignoring our area, but may be either being blocked by a competing company or may be planning to merge with this company and see if you can ‘fix’ the issue (hopefully) with a tower from Sprint. I will show you the confirmation map first, to show that there are definitely no towers “near” me from T-Mobile (I don’t know why they don’t show the others with this site) : 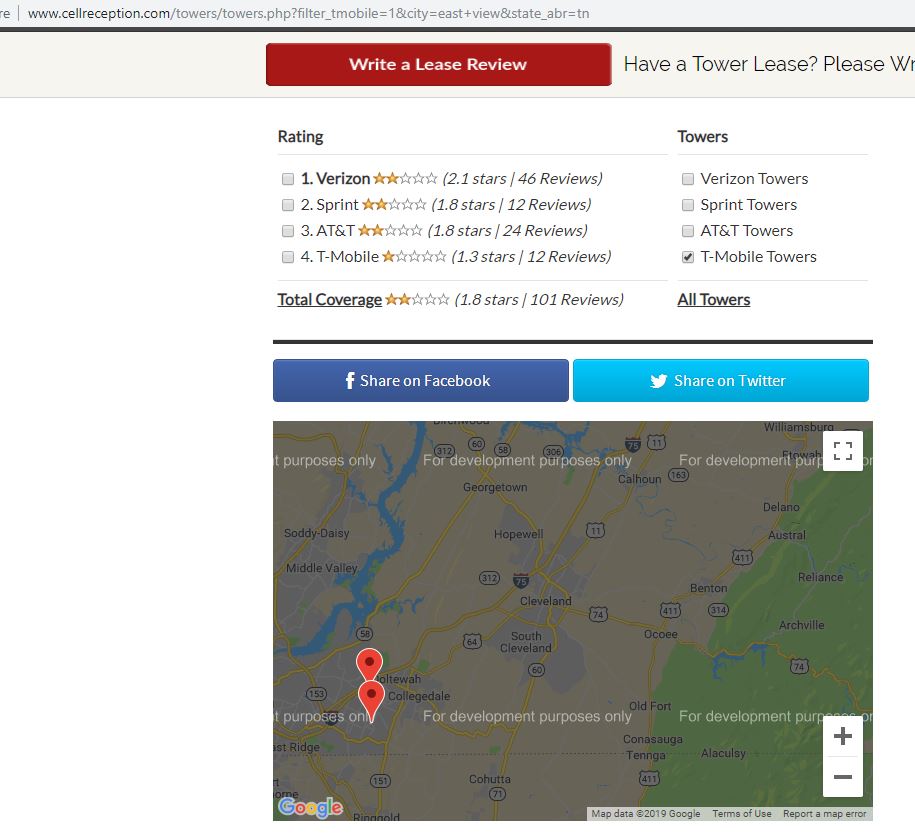 And then, when I select Sprint as a provider, I see that there is a tower just behind my neighborhood, less than a mile: 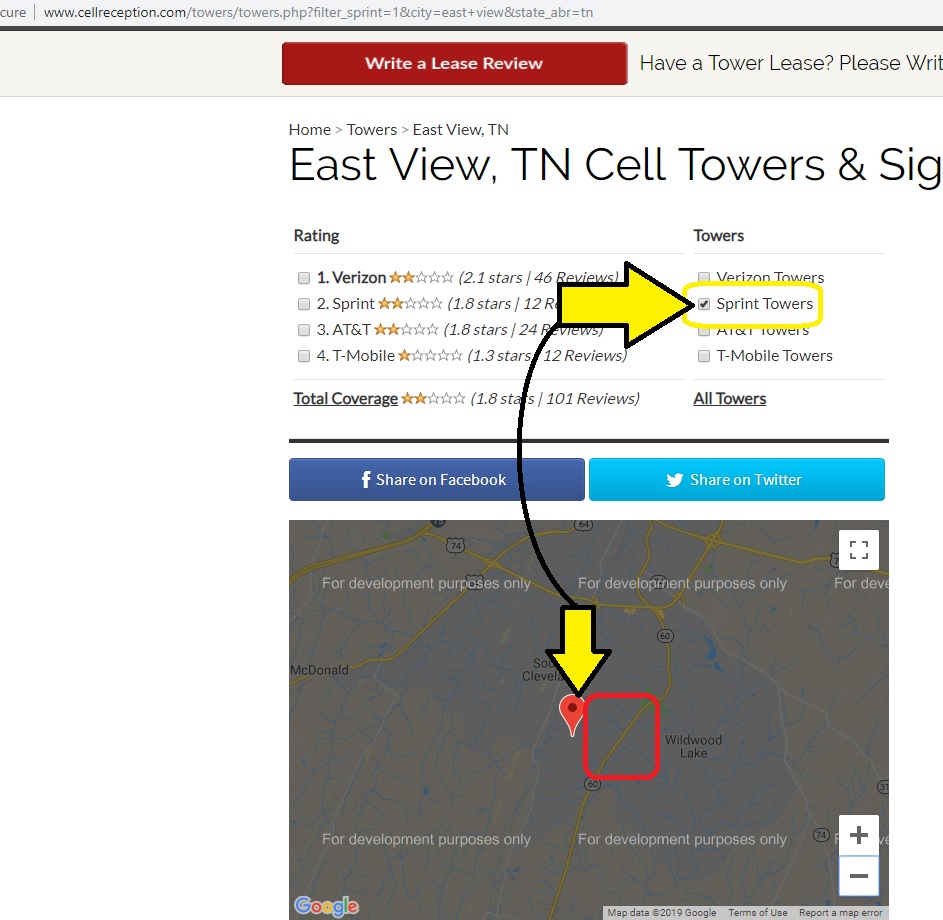 This leads me to the fact that I hope, that this is the plan, that if (here’s hoping) the merger goes through, you can use that equipment already there or upgrade it and make my area better. I am just really frustrated with your coverage in my home area and dislike having to drive nearly 2 miles away from my house before I get a good signal and can start streaming my Pandora!

The Temporary Solution (I hope)

As I stated above, there are multiple options that your company provides, including an ASUS Wifi Router for Wifi Calling (not sure if you still provide this), a Cell Booster, that takes two smaller boxes and uses one as a repeater and one as a booster to repeat an outside signal back into the house (now looking back, I probably should have ordered this instead) and finally the LTE Personal CellSpot V2 that I currently have. Now, I do want to clarify, I have no clue how much each of these devices cost T-Mobile, but the customer is typically charged $25 for a deposit to receive these and can be refunded upon cancellation of service or return of the device. I have heard that you can get that fee waived, but in my case, they did not.

That being said, I am sure there is some cost of these devices as the initial cost of T-Mobile purchasing specially branded versions of this Nokia device (not actually Nokia, but a separate company that makes them and uses the Nokia branding). That aside, I find it odd that we as customers are not compensated for expanding your network in small cell areas of about 3,000 square feet. I have heard on some Reddit threads that it can be a few acres? (Wow if that is true!) I say that, to say, if we are “fixing” an issue with your equipment that you provide, we should be compensated a $5 or $10 discount on our monthly bills.

Here is my argument, as I have combed over many T-Mobile Support Forums and a Reddit Threads to read the complaints. Since T-Mobile does not provide any customer facing UI, GUI or CLI to be able to view or change anything with this femtocell, all T-Mobile (and I have read some At&t customers, I assume roaming) customers are allowed to use this tower, as if it were a macro tower. I understand that in both the macro and the micro towers, that it is the company equipment, but if you are using our internet connection to create it on the micro equipment, we should be compensated monthly.

We as customers are paying for our own “landline” cable, fiber or DSL internet and some of these companies still have data caps and these can be crashed through if there are neighbors or any T-Mobile customer coming through and using the micro tower. I have read some, not many, stories of since adding these femtocells into their network of them going over their data limits. This can be easily seen by jumping into Reddit or the T-Mobile Forums. So the overall thing is, that we are paying twice for internet, when it should have been provided without having to get your home solutions. In most rural areas, the cable and DSL providers do not have great speeds to provide to this CellSpot. I am a unique customer and have a 100Mbps connection behind it with no data caps, so I am a “unicorn”, I would think, but can understand other customer’s issues with this device.

I think that At&t provides a whitelist function on their Femtocells, so that only selected users can use it. Which leads me to the second issue, which is the fact that the data on this micro tower is STILL counted in our monthly counts. Why is that allowed? I understand it costs money to maintain a VPN tunnel between these devices and the T-Mobile network, but you again, are using our internet that we are being charged for. We should not be charged data counts in our monthly counts when it is STILL our own backhaul behind the microtower that is feeding the LTE signal created by the device. I believe that not only should we be be compensated a $5 or $10 monthly discount, but also given any data that we use on your microtower and not counted as “on-network” 4GLTE/4G/3G that you would provide if we were connected to a macro tower. It just seems very backwards and I think could be reworked.

I am thankful for your time and attention to this issue and hope that you will seriously consider my complaints and possible solutions. Please feel free contact me via my Twitter (@RustyG) if you would like to help!

One of your biggest fans in the Southeast!