Starting in mid-April, the iPhone exclusive carrier will be rolling out the 3G microcells we saw being tested in select cities last year. Basically this little guys gives you 5 bars in your house or place of business over your internet connection. This is part of plan that At&t is working on to improve it’s network issues that have become synonymous with it’s 3G data connection. The best part about this is, there isn’t any extra charges to use this device, all you have to do is purchase the device for $149.00. There is a premium optional package that you can add to your current wireless plan, so that you can use the microcell tower as an unlimited source for minutes, and not have to count it against your regular minutes. If you opt for this, you can get a $100 mail in rebate card, to bring the final cost down to $49!

Basically this device uses your internet to create a secure connection to the At&t network and rebroadcasts it as a personal 3G tower that you can control. The box gives you control over who is able to connect, and you can have up to 4 devices connected at once. All you have do is log into your At&t account and add approved At&t numbers to the list, and then when they come into your microcell, they are automatically connected, unless of course they are already on a call that was already on a cell tower, but it will switch once the call is over.

This is also just in time for the upcoming iPad release and possible iPhone update coming in June. Apparently At&t is looking to change their image on their poor network issues with the roll-out of this microcell; but also changing the way the iPhone connects to the 3G network. It seems some At&t network guys flew out to Cupertino to show the Apple guys some down and dirty on how the connections work and possibly relieve the load that the iPhone puts on the 3G network.

According to AppleInsider, it looks like Apple may be looking into turning the iPhone into a walkie-talkie device, much like the Motorola’s on the Nextel/Sprint technology. This filing was done in November of last year (2009), so is it possible that it will be in a future update of the iPhone (since we have no confirmation that it will be upgraded in June)? It also looks like they have plan to turn those unheard instant audio messages into voicemails, so if you missed it on the instant, you can go back and play it again. So far, this looks like an iPhone only feature, as AT&T does already feature Push-to-Talk 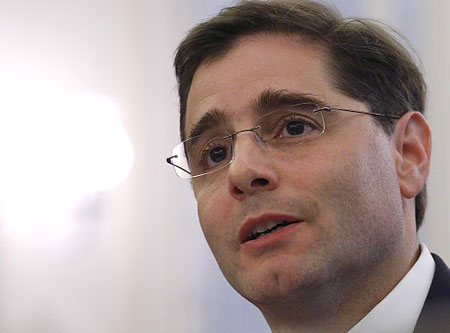 The still fairly new FCC chairmen Julius Genachowski is rocking the airwaves brother, and I mean in a good way! At least for the bottom line. Mr. G is trying to make use of the Universal Service Fund(USF) that we all get charged on our phone bills in a new way. Currently, it is used to subsidize the phone lines for low-income households. For an AGING technology. He wants to revamp that to start paying for broadband to the curb for rural areas that we were all promised in the FREAKING 80’S (what happened to all that money AT&T????!!!!). And you begin to hear the cries and sorrows from the AT&T camps already. SHUTUP! At least someone is finally holding you accountable for what you were supposed to do with our money YEARS ago. And don’t even get me started on the whole Net Neutrality thing, that is so far gone off the end of the grand canyon, that’s not even funny. (You should read this horrible article seeming to lean towards the side against Net Neutrality from The Week{paid subscribers only}, it basically says that we are stifling innovations with Net Neutrality, which is the biggest freaking lie, grrrr… I hate even thinking about the idiot who wrote it) It seems all I hear about is how AT&T is groaning and crying and sending lobbyists after lobbyists to the capital hill and all I keep seeing is that AT&T freaking sucks!

He is even trying to free up the TV airwaves to make sure we are the world leaders in the next 10 years! Guess what? More whining and moaning from the cable companies. An economist for the Brattle Group, Coleman Bazelon, even said that if the freed up space from the TV airwaves, which by the way aren’t even being used at this current time, would be worth an estimated $64 billion dollars if they were used for wireless, where as they sit right now, only $12 billion. Are you freaking kidding me? That sounds like elementary economics to me, but NOOOOOO, cable companies don’t want to lose their strong hold. We can’t take a freaking penny from them, even if it did better mankind, it’s all about the money going into their pockets.

I honestly don’t understand why this country is still run by stuffy old white men who are cheating on their wives, squandering billions and billions of dollars on themselves, instead of speeding up the technology curve, that we are falling BEHIND the rest of the world.  I just pray that this reaches the masses, and even President Obama or Julian Genochowski:

Thank you for pushing to have broadband to the curb, to All equally. Broadband is the future, and we as America have fallen behind, because we have allowed large corporations to squander our money on yesterday’s technologies and outdated utilities. No longer should we stand by and watch the money be wasted. Thank you Mr. Chairman for looking into revamping the USF. It needs a new direction, and we need to open innovation to everyone. We cannot be stifled by the AT&T’s and Comcast’s who ‘own’ the lines. They have to understand that innovation can come from a 12 year old child in Chicago or even a 65 year old man in Utah. We cannot block the lanes of traffic and create these so called ‘fast lanes’ that only the super rich can afford to travel on. We don’t have highways that we drive on and pay for and get no speed limits. We all drive on the same highway and we have speed limits and if you feel the need to drive faster, then you pay for going faster. That’s the way the internet should be. If I want to go faster, then I should be charged a little more, but I don’t get any special treatment. (that sounded good in my head.. after thinking on ti, i don’t know..)

I got a little carried away there, sorry. My point is, Mr Chairman, Mr President, please keep pushing and keep fighting for broadband to the curb. Make sure we keep Net Neutrality as the rule. We cannot and will not be told what we can and cannot do on the internet, just because some guy at the top wants to make the rules, because ‘they’ built the roads, and in the end just wants to put more money in his pocket. Call the cable companies and tell them that they can free up some of their airwaves for future wireless technologies, we can be the leaders in wireless technology in 10 years!