Ok, I really hate for next blog to be complaining about stupid things, but this is JUST PLAIN LYING. Let me give you a little background here. All of the 4 major cell phone providers have been trying to have a 4G war for the like the last 2 years. It’s the basics of a pissing match, or to see has the biggest junk, is what it all boils down to. Let me first say this, so that you know what TRUE 4G is. Right now in the 48 contiguous states of the United, there is only one true 4G product being used, and this is LTE. LTE stands for Long term evolution. I think At&t actually put it best in this video they have on their website.

Check it out below:

The ironic part of this video being done by At&t is the fact that they are actually telling the truth in this one. ONCE and only ONCE. One more background on the 4G wars. When this whole thing started, At&t was standing it’s ground and keeping with the 3G moniker and saying that everything was still 3G, until January 2011, when out of the blue, someone kicked the CEO and said, hey, we are falling behind in the 4G wars, we need to fix this. So they just started saying they had 4G, and there were no network improvements, no back haul changes or any sort of upgrades. It was if it was magic, and someone had flipped the switch and all of sudden, we were 4G! WHEW! Well what does that mean? Nothing really, because at the time, they didn’t even have HSPA+, which T-Mobile at the time was touting they had for their “4G” devices(which by the way, isn’t really 4G either). At&t was sticking with HSPA (no plus), which is a 3G technology. You can see this right now on their website: http://www.att.com/network/?. Go to the technology tab, and you will see HSPA marked at 3G. HA, so this is where At&t started telling their little white lie. Then, came along HSPA+ and we continued to call it 4G, because At&t figured, well we started with a little white lie, lets keep it going. (Thanks to the marketing department) The funny thing is, looking back, NOW At&t calls HSPA 3G as it really is now, when they were calling it “4G” when it was around. 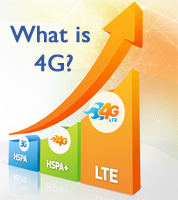 Enough of At&t, let’s talk about the quiet company Verizon. This company had recently acquired the 700MHz spectrum from the government. Which was soon to be the now 4G LTE that they are selling. Verizon really never had a horse in the 4G race to begin with, they were sticking to their guns with 3G CDMA/EV-DO. They never really had any 4G marketing going on, while Sprint(which is another story), T-Mobile and At&t were all spatting it out. Then out of the clear blue, Verizon had setup their towers in the background and BOOM! Phones like the Thunderbolt, Rezound, Droid 4 (all android based) started popping up with LTE! TRUE 4G! All the while, At&t, T-Mobile and Sprint were falling behind in the race, the REAL 4G race, LTE.
At&t to this day is still touting HSPA+, as well is T-mobile, as “4G” and this is just a LIE. At&t does have LTE service in select cities, as of this writing, and select LTE devices, but NO WHERE near the footprint that Verizon has, because they won the 700MHz auction BACK in 2008!!

This all leads me to the reason why I am writing this article. I was watching free OTA tv this evening and this commercial came on:

It really bugged me, in this frame here: 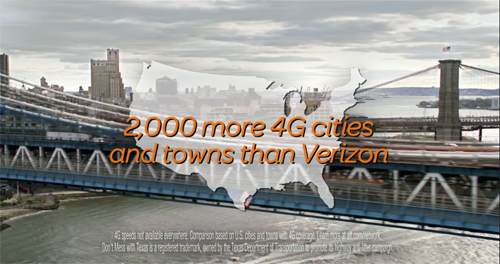 Let me say this, this is a flat out blatant LIE. At&t is using “marketing terms”, as it has been dubbed, to be able to say this. Since At&t has been lying since January of 2011, they can continue their charade of saying they have “the most” “4G”. If you subtract the 3.5G HSPA+, which you should, Verizon wins. At&t has under 50 cities that carry the LTE technology, and Verizon has (currently) 230 cities. So SHUT UP At&t.

Next on the chopping block: T-Mobile. Why is that you say? Well, T-Mobile has been touting their HSPA+ as “4G” as well. So why are they saying they are the fastest? Well let’s see, marketing has re-branded their wonderful and beautiful Carly Foulkes as no more Mr. Nice Guy and put her in all black and pink leather. I love their idea as to where they were going with this, IF, they had actually had some LTE to launch, but they don’t and they won’t. At&t tried buying them out last year for a record $39 billion dollars, but with millions of people like me, who voted against it, it never happened, and T-Mobile didn’t have LTE on the road map. They basically went on cruise control and thought the At&t buy out was going to happen and they didn’t need to worry about it, because At&t would have to deal with that problem. WHOOPS, we made a mistake! So now sits T-Mobile without any LTE plans, but they need to look like they are still a viable “4G” option. Look, I will say, if you are looking for just voice services and you aren’t worried about data or smartphones, then heck, go with T-Mobile, but they will not satisfy the data hungry smartphones that are coming to market, so keep that in mind. Until T-Mobile comes back with a LTE plan or something else that is true 4G, they have to sit this one out.

Here is my complaint, the commercial that I briefly mentioned above. Here it is:

The same thing goes here. The motorcycle is to entice that need for speed feeling and the fact that you want to be the fastest. Well when you put a snail next to a tortoise, then next to a rabbit, this is pretty much what REALLY is happening. Tmo and At&t are the two slower, while Verizon is cleaning house with LTE. Here is the frame I am having trouble with, the same claim that At&t has: 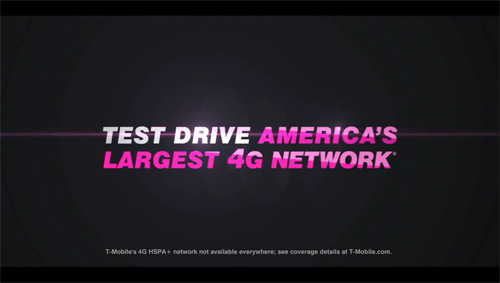 Now how can At&t and T-Mobile both have the largest? Well, let’s see, if you are going to include a 3G and parade it around as “4G”, then maybe, but let’s count how many LTE devices or cities that Tmo has. Oh wait, I can’t seem to find any. Know why? There is no such thing on T-Mobile. So what about this test drive site that T-mobile is showing, they show it IS faster! That is PROOF (right?).

Not really. Let’s go over these test drive pages they have setup.

What’s the problem here? Oh that’s an iPhone 4S (or 4, it doesn’t really matter here) and Samsung Galaxy S II. Lets go. STOP. You cannot race a 3G device against a supposed “4G” device. Sprint isn’t even on the same spectrum that T-Mobile is. HSPA+ is going to be faster than Sprint’s 3G (EVDO??? – fact check me someone) network, #DUH. Also if you look at the screens, the Galaxy says 4G and the iPhone says 3G.  SCRATCH. MISTRIAL. WHATEVER you want to call it.

Is that another iPhone 4S? Wow, this is a little more close,a  fake “4G” device against a fake “4G” device. (Apple actually wanted to stick with keeping the 3G moniker at the top, but At&t made them change it in the iOS 5.1 update. Read more about that here.) The problem here is, At&t and T-mobile don’t run the same spectrum for their fake 4G networks. This is why if you take an unlocked iPhone to T-Mobile, it will never get on their 3G network and you are stuck on EDGE. It’s really horrible for people that leave At&t with an unlocked device, it is suppose to be compatible at that point, but it really isnt. SO, we really have to scratch this race too.

UMM.. is that an iPhone 4S again??? (I am really beginning to think that T-Mobile is just really jealous, that it is the last major carrier that does NOT have the iPhone.) Same thing as #1 here. Verizon’s iPhone 4S, in still running on a CDMA/EV-DO 3G network. So again.. NO Comparison.

This really just ticks me off to no end, that both companies are really lying flat out, just because they know they are losing the 4G race, and now they are just making outlandish claims and throwing stupid punches. At&t, T-Mobile, Please stop. You are confusing the average Joe, who doesn’t do their research like I do. It is people like me that have to call you out on it, and you need to be corrected.

UPDATE: I even liked reading this article on Digital Trends calling “4G” a meaningless term!