So in cased that you missed the HUGE news yesterday around 1pm CST, it seems that mobile provider AT&T will be purchasing T-Mobile for a whopping $39 billion dollars, broken up into 25 billion in cash and the other 14 billion in stock of AT&T. The purchase now has to go through the government and be approved, but it doesn’t seem that that will be any problem. The idea behind this purchase is to “…strengthen and expand critical infrastructure for our nation’s future. It will improve network quality, and it will bring advanced LTE capabilities to more than 294 million people” –AT&T CEO Randall Stephenson. The overall seems to put AT&T as the front runner and spread their “4G” footprint. With T-Mobile having roughly 35 million subscribers and AT&T having roughly 95 million, this will springboard AT&T to the largest mobile carrier in the US. Verizon is currently the US largest at 100 million, but now, this purchase will keep Verizon in a far 2nd for a long time. 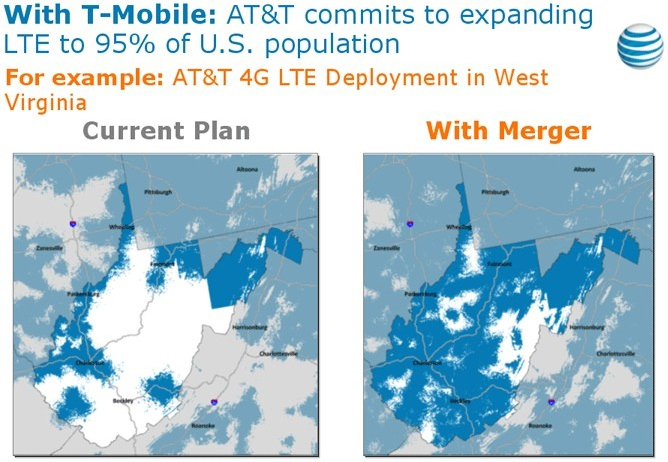 This is just one of the slides from the buildout slides that shows how the merger will make AT&T better in several states, including Texas, Michigan and West Virginia. The merger with T-Mobile will definitely call off the commercials that T-Mobile likes to tout that their HSPA+ “4G” is faster than AT&T’s 3G. Even AT&T got in on the mess, calling T-Mo out and saying their “4G” wasn’t real 4G. I guess all this bickering was the pre-marital arguing and all will be forgiven for this un-holy monopoly marriage. It will combine AT&T’s 700MHz spectrum and T-Mobile AWS spectrum. T-Mo was also the last GSM competitor to AT&T, so now AT&T will be the only GSM provider in the US. T-Mo customers don’t fret just yet, it is said this purchase will take 12 months, so you have got some time. The only problem is, your customer service levels will DROP, so say goodbye to that. Oh, and the other burning question that all of the T-Mo customers have: There will be NO iPhone for you. (The GSM radios in the iPhone are not set for the T-Mo towers.)

The funny part about this is, the Sprint rumors we were hearing last week, are obviously off the table now. And Sprint has something to say about that!

Feel free to leave comments and questions below!