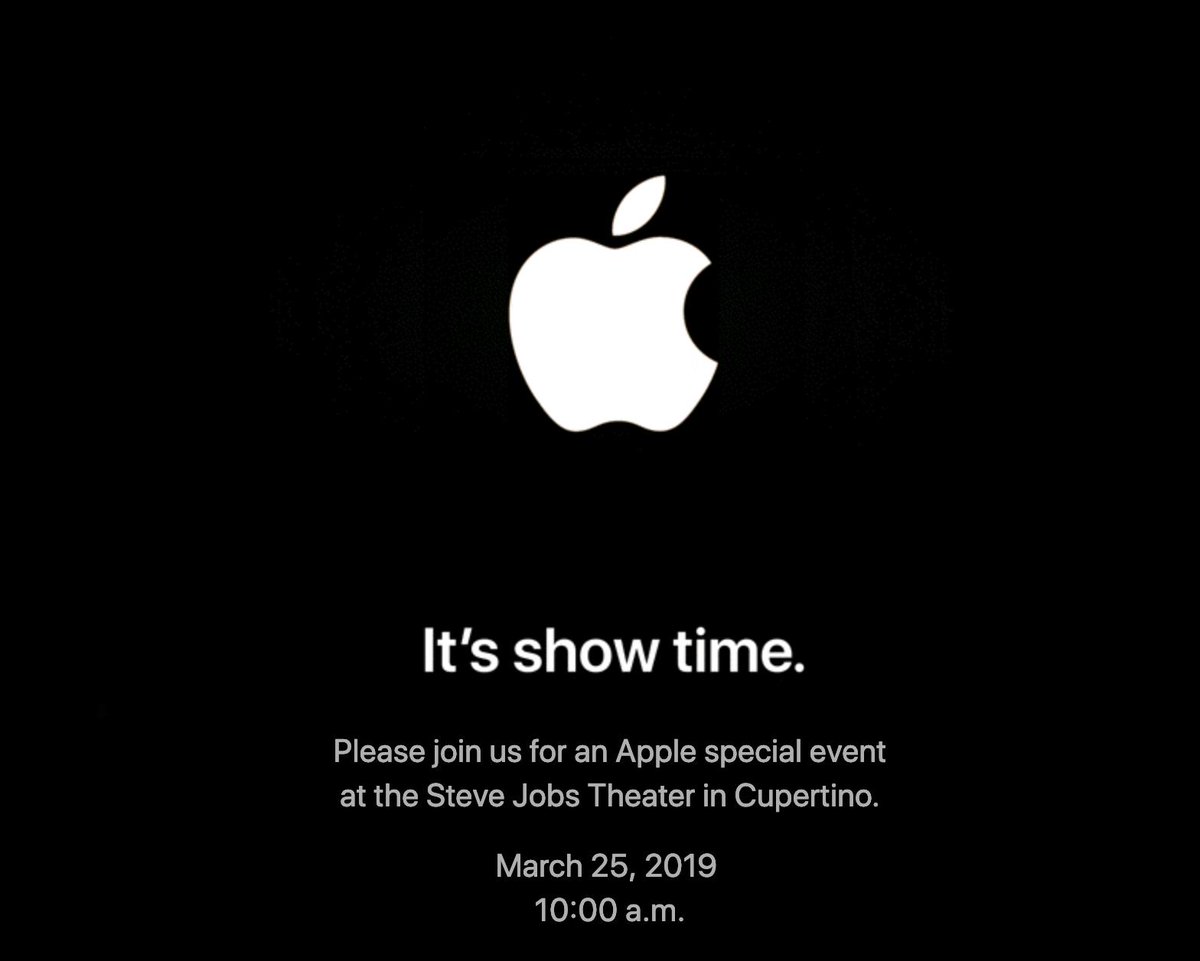 So the invites have gone out for the March 25th, 2019, Apple event. As all of the rumors have pointed towards and now the almost cofirmed, “It’s Show Time” showing up on the invites, it can all but be confirmed that we will be seeing the new streaming service come from Apple. With the fact that Apple has stopped sharing the iPhone sales numbers last year, due to the fact that all smartphone sales have basically maxed out, and the market is basically saturated with smartphones everywhere. People are a little stressed out with the now common $1,000 entry point for some major flagship smartphone manufacturers and are now holding on to their phones for longer due to many reasons, but one being the lack of innovation in the newest phones being released. We are not seeing a lot of major changes in the year-to-year and some are waiting anywhere from 2 years or more until they upgrade now.

(I wish we could go back to contracts and subsidies, rant ahead)

I will admit to a sidebar here, as I find this funny, but with folks holding on to their phones for 2+ years now, why can’t we have the option of going back to a 2 year contract price and getting the cell phone carriers subsidizing some of the cost? I remember when T-Mobile basically set the precedent for this and killed off of the contract. This at the time sounded amazing, but basically, they didn’t “kill” the contract, they just re-labeled it and made you pay full price for your phone and they no longer subsidized the cost of the phone. I saw that as a very manipulative way of marketing, but a ton of people liked the idea of no “contract”, even though they were still in a “contract” of a different kind. Those terms aside, T-Mobile started this new way that mobile carriers do business and all the other major carriers followed suit and now, we the people have to pay FULL price for our phones now, which is vary frustrating. I personally WOULD sign a 2 year contract with my carrier of choice, to get this price back down to something more manageable if we are going to continue to this foray in to the $1,000USD+ entry point on smartphones. I was with At&t from the time I was 18 (then Cingular Wireless) until I swapped back in 2014 or 15, I believe it was. I have been with my same carrier now since that swap and have no plans to swap anytime soon, unless there are some major changes.

So with the fact that people are getting phones much later and the market has been saturated, Apple has been planning for the future as people are moving to the streaming platforms in droves and the physical format may soon be dying. Even Samsung has stopped making Blu-Ray players, but this had more to do with the fact that they haven’t kept up with the trends and not updated their hardware, but that is besides the point. Apple knows that people are subscribing more to online services and want to cash in on it. They are already making it work with Apple Music and they want to expand their services into the video industry.

Netflix is the #1 video streaming service as it stands, in my opinion. Obviously, there are multiples out there, including Hulu, SlingTV, DirecTV NOW, Amazon Prime TV and many many others. I don’t want to delve into the individual services from the individual content providers like ESPN, HBO, CBS, NBC or any other direct providers, but just the overall platform providers that are “content agnostic”. I put content agnostic in quotes, because now I am going to lean towards the upcoming and rumored, but almost confirmed Apple video streaming service.

It seems that Apple will be announcing their streaming service to compete with the likes of Amazon and Netflix. I think this will be the same $10 per month entry point like most of the others out there, along with other tiers. Apple has been very good at making contracts with certain companies in the past and making services more “mainstream”. I use iTunes and the P2P sharing from back in the days of the early 00’s as my point of reference. Apple was able to make it so convenient and fast to purchase music for the first time when it launched iTunes Music store in 2003. They were able to bring most of the major labels to the table and basically take over and create the online music market.

Now fast forward to 2019 and we are about to see the announcement of Apple’s streaming service and I want to give some thoughts to what they may be working on. Beginning in January, I started getting notices from a few of my services that I subscribe to for my online digital library that I don’t normally use. Let me show you what I received: 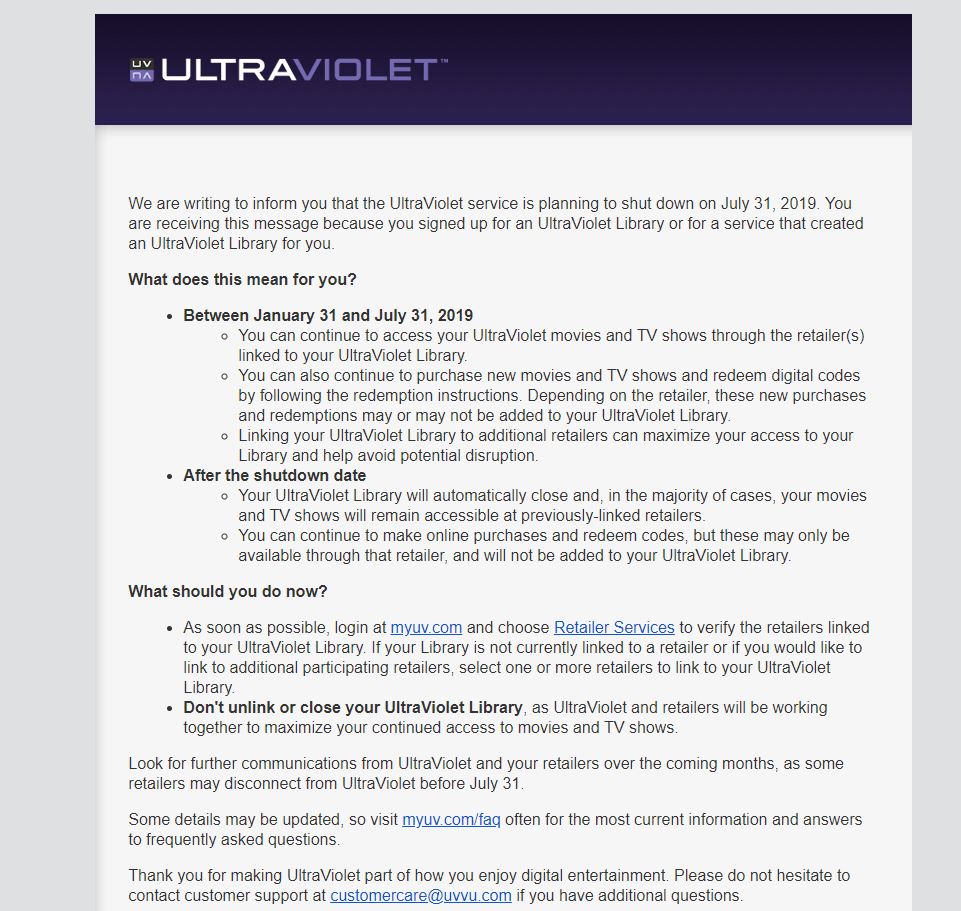 This is the first email that I received from Ultraviolet and then I got another email from Sony: 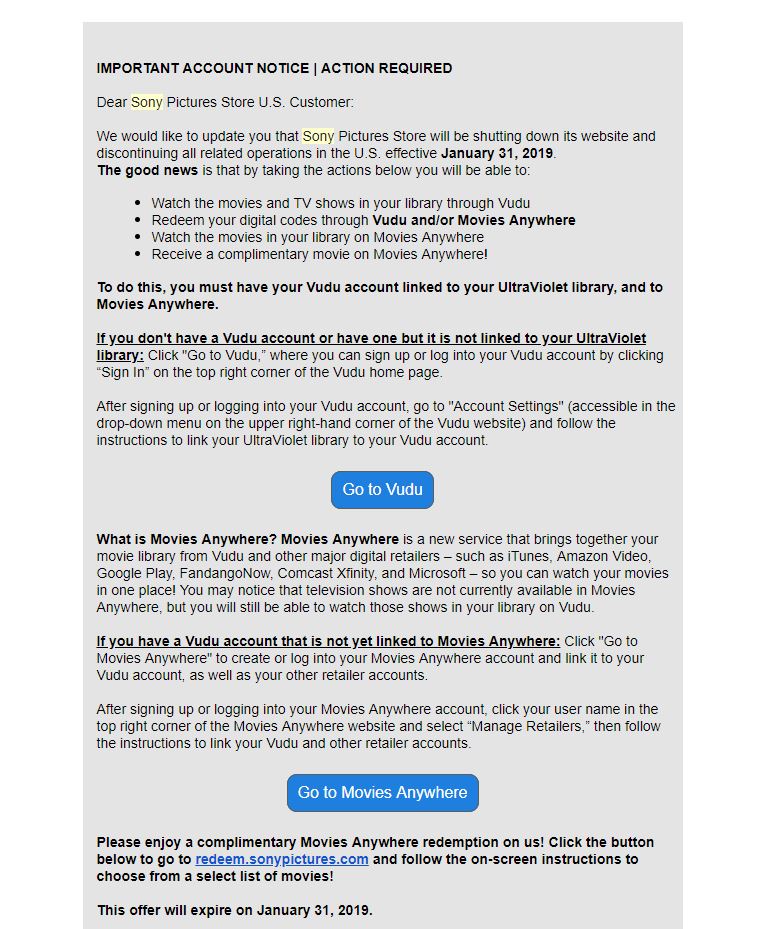 I am just speculating here, but I am thinking that these are major movie services that are shutting down because they have been bought out by Apple. I have no hard facts or points of reference to confirm this, but I think these are good indicators that Apple may be buying up the licenses for these movie providers, and adding to their already expanding library.

You have to understand that Apple is already working pretty heavily and almost directly with Disney/Pixar/Marvel/LucasFilm and will already have the rights to those media libraries and you already see this in your current online library if you have any of these movies streaming to your AppleTV. Apple still needs to bring in some of the other major studios to round out their available movies if they want to play more than just Disney owned content. I believe that these notices I received above are the pre-cursor to seeing Apple bringing in the other names like Sony and whatever deals that Ultraviolet has with the others.

I will say that I think that MoviesAnywhere may be either their direct opponent or we may see a re-branding of it to the Apple streaming service, because they have also been slowly getting all the online digital services under one house. I say re-branding because Disney itself, shut down it’s Disney service recently as well as it moved over to the MoviesAnywhere service.

In another story that I thought I would never see, Apple also has announced partnerships with Samsung to get the iTunes media libraries on their Smart TVs starting in 2019! I think this has to do with more of the fact that Apple doesn’t have a dedicated, 1st party television set that they sell and that they need to get to the market that does not buy Smart TV dongles like the AppleTV, Amazon Fire Sticks or Google Chromecasts. If you are a TV consumer who never buys the extra STBs, but may have purchased a Samsung Smart TV, then this is another way to get you into the Apple Ecosystem.

I could be totally wrong here, but as a long time tech person, I feel like this is how it will go down on March 25th. Only a few more days away and we shall see!